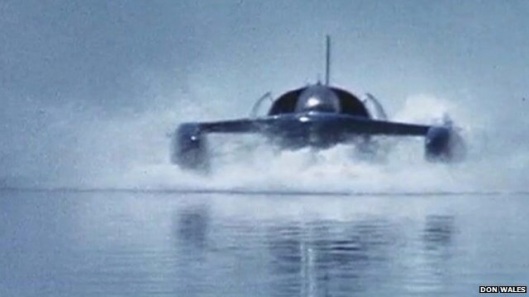 The film has been restored at Beaulieu National Motor Museum.

From 1955, piloting the Bluebird K7 jet-powered hydroplane, Campbell set seven world water speed records. He was killed at Coniston Water, Cumbria, in January 1967 while trying to improve on his 1964 record, at Lake Dumbleyung, by reaching more than 300mph (480km/h).

His Bluebird CN7, in which he set his 1964 land speed record on the dry bed of Lake Eyre, is part of a display at the museum.

Campbell’s nephew and land speed record holder Don Wales said: “It’s about time that people fully recognised that Donald Campbell should be remembered for that fabulous achievement and not just for the crash that ended his life.”

The film, How Long A Mile – which Campbell directed, will be shown in public for the first time at a sold-out event at the Hampshire museum on Saturday.