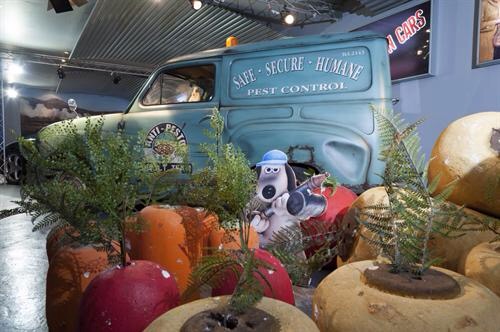 The Wallace and Gromit Anti-Pesto Van is the latest exhibit to arrive in Beaulieu’s On Screen Cars display. A plasticine version of this Austin A35 van was created for the film Wallace and Gromit: The Curse of the Were-Rabbit.

Nick Park, creator of the Wallace and Gromit animations, used to own an A35 and thought it was the ideal model to use in the film because “the van needed to be big enough to transport Wallace’s invention, the Bunvac 2000, while slick enough to go on high-speed chases.”

In the film, Tottington Hall’s Giant Vegetable Competition is fast approaching and Wallace and Gromit are running a vegetable security and humane pest control business, Anti-Pesto. In order to cope with the increasing amount of captured rabbits Wallace invents a brainwashing machine, but a mistake during the operation creates a ‘Were-Rabbit’, a giant rabbit which eats vegetables of any size. It’s down to Wallace and Gromit to capture the rampaging beast before the competition!

The Anti-Pesto Van, which has been loaned to Beaulieu following a call-out for new vehicles for the exhibition, joins a host of other star vehicles.

The ‘flying’ Ford Anglia on display was used during the making of Harry Potter and the Chamber of Secrets. In the film, the enchanted flying car is stolen a number of times by Ron Weasley, on one occasion to rescue his friend Harry Potter from the Dursleys’ house, and on another to return to Hogwarts after the gate to Platform 9¾ is sealed by house elf Dobby.

Sharing the spotlight with the Anglia is TV favourite, Mr Bean’s lime green mini. This particular car was used in the character’s third series and made its first television appearance on 1st January 1991.

Another TV favourite on display is Del Boy’s beloved Trotter Van. Possibly the nation’s most famous three-wheel vehicle, this Regal van featured in the BBC sitcom Only Fools and Horses. It was the sole transport for the Trotter family of Del, Rodney, Grandad and Uncle Albert, until Del Boy later went ‘upmarket’ and purchased a Capri Ghia.

On Screen Cars can be seen as part of a visit to the whole Beaulieu attraction, which also includes the National Motor Museum, World of Top Gear, Beaulieu Abbey, and Palace House and gardens.

The National Motor Museum has a dedicated motorhome parking area. The Museum hosts the archives of The Caravan Club and has a permanent Caravan Club display.