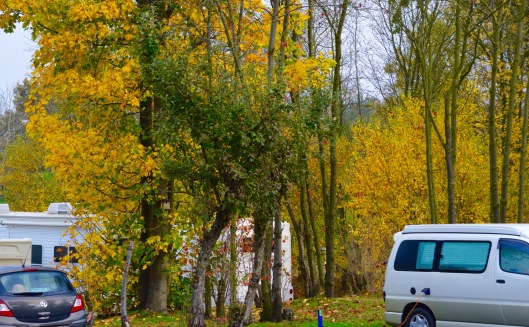 I stayed at The Caravan Club’s Chapel Lane site over the weekend and it is in full autumnal colours. The wardens are doing a brilliant job keeping the site in tip top condition whilst the leaves fall and a state of calm and  tidiness prevails. The site is south west of Birmingham very close to Solihull and the M42 but is a surprisingly rural setting in the shadow of an old chapel. It is open all year and, needless to say, is very popular.

Earlier in the week Faye and I had somehow found an evening we were both free and booked a couple of online seats for SPECTRE which lived up to all my expectations for sheer escapism and wonderful action.  The opening scene in Mexico City does your head in. James Bond is partnered throughout the film by the daughter of an old nemesis and in tracking down SPECTRE finds out rather more about his childhood than he had bargained for.

One aspect of the film concerned me.

My lobbying work places me all too frequently in the “politically correct” arena and consequently I am perhaps more on my toes than I would normally expect to be. After one particularly high charged action scene Bond and his partner find themselves in a heap on the floor at which point she turns to him and says, admittedly rather coyly,  “What do we do now?” and of course we are next in a romantic clinch – and more.

My point is this. I am not sure when someone turns to you next time and says “What do we do now?” it is safe to interpret that as an invitation for some highly personal interaction and I think Bond may have taken advantage of this woman without getting her clear and unequivocal agreement in advance in the cold light of day.

This is quite shocking and sets a poor example to other would-be spies who see Bond as a role model. How this country is expected to recruit quality spies with standards when this is the way they are portrayed is difficult to grasp.

And then of course there was Saturday afternoon.

Faye is a New Zealander but has lived in the UK since the 60’s and many years ago passed the Tebbit Test. Tebbit you will remember is a former MP for Chingford and a former cabinet minster. In 1990 he made the remark that immigrants should be asked which side their grandparents fought for during the Second World War and which cricket team do they now support living in the UK? If they did not support, say, the England cricket team living in England, they could not be considered truly loyal to England.

Faye passes the test with flying colours and has been an England rugby supporter for years but a crisis emerged early in the tournament when England got knocked out through incompetence and lack of ability. Old loyalties re-emerged quite understandably and I too found myself favouring the All Blacks. So by the time Saturday’s final took place Faye had requested leave of absence from the Tebbit Test and without any UK team of any description in the final I had joined her.

And what an absolutely brilliant game it was; superlatives scarcely do it justice. And what a void is left behind now it is all over!