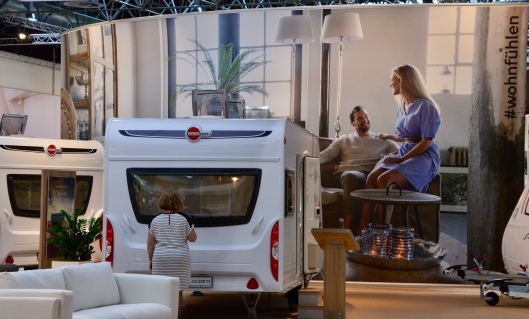 Spencer Allen, head teacher at a local school in Swindon, and his partner, had to put their holiday plans on hold when thieves stole their caravan from a secure storage site near to their home. Fortunately, the Sprite Major 4 was fitted with a TRACKER device, which quickly led Surrey Police to the stolen vehicle. TRACKER’s Mesh Network played a key role in helping police trace the caravan to an industrial site in Guilford, allowing them to return it to the delighted owners.

Building work had been taking place on the storage site where Spencer had been keeping his caravan, and a skip had been blocking access to the locked gate to the caravan for some weeks prior to its disappearance. However, as soon as the skip was taken away, thieves swooped in, suggesting they’d been watching for the perfect opportunity.

Once the theft was reported to the police and the TRACKER device was activated at TRACKER HQ, police were led to its location within just three hours. TRACKER’s unique Mesh Network technology takes advantage of other vehicles on the road that are already fitted with a TRACKER, to relay information about a stolen vehicle that is equipped with the same technology. This brings drivers together to create a UK wide network of ‘listening vehicles’ which can help pinpoint the location of a stolen vehicle.

Spencer Allen says, “We’d been planning to go away with the caravan before winter set in, so it was still kitted out with our personal belongings. These would have normally been taken out when we prepare it for winter storage. Sadly these items been taken by the thieves, right down to a tube of toothpaste and some doggy chews, but thankfully we got our caravan back. We’ve already had one caravan stolen, but that one didn’t have a tracking device fitted and was never recovered. It was our pride and joy, so having a SVR device fitted in our replacement caravan was a must, both for our peace of mind, but also for our insurance.

“The TRACKER installation was part of the deal we secured with our caravan retailer and it’s fair to say I was sceptical, originally, but now I can see that it’s a service that really does works. What’s more, the team at TRACKER that co-ordinated the recovery with the police, were second to none. The reassurance they gave us throughout, kept us at ease and gave us the confidence our caravan would be recovered. I can’t express enough that the level of customer care the team provides, let alone the technology used to track stolen vehicles, is worth every penny. If it wasn’t for TRACKER, we’d probably have lost another caravan to thieves. But not this time.”

Andy Barrs, Head of Police Liaison at TRACKER (part of the Tantalum Corporation), comments, “TRACKER’s Mesh Network plays a significant role in the speed of recovery of vehicles stolen that have a TRACKER fitted. And as more and more motorists recognise the power of TRACKER’s SVR technology, the power of the Mesh Network continues to grow. Spencer’s case clearly backs up these figures and demonstrates the value of this unique technology in reuniting stolen vehicles with their owners.

“When a vehicle fitted with a TRACKER device passes any vehicle reported as stolen with us, and which is also equipped with our stolen vehicle recovery technology, it automatically sends a signal to TRACKER providing the location of the stolen asset. Whilst it won’t stop a caravan or vehicle from being stolen, a TRACKER device, enhanced by the Mesh Network, closes the net on thieves by increasing the chances of police locating and returning stolen assets.”

Unlike other devices, TRACKER’s unique technology can locate stolen vehicles anywhere, even when they are hidden in a garage or shipping container. TRACKER has been reuniting car lovers with their vehicles for nearly 25 years, and it’s this expertise which makes TRACKER the leader in stolen vehicle recovery. TRACKER stolen vehicle recovery systems work like an electronic homing device. A covert transmitter is hidden in one of several dozen places around the vehicle. There is no visible aerial, so the thief won’t even know it’s there.