Time spent at the Dusseldorf show is time well spent I reckon.

Many new products were launched – but this concept e.home from Dethleff caught my eye. Covered in photovoltaic cells (solar panels to you and I) it also had its own dedicated Alexa which arpart from her other well known capabilities controlled all the main functions. Even changing a frosted glass door panel into a full length mirror….

“All in Caravanning 2018” is an industry wide initiative to attract a new audience – much like the Discover initiative we have in the UK. 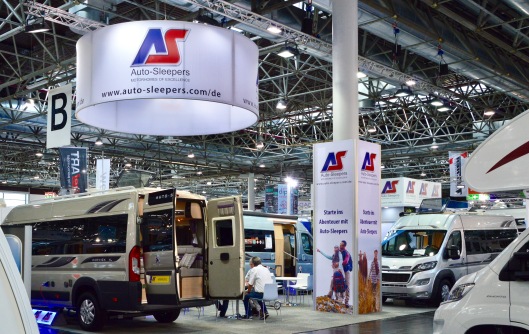 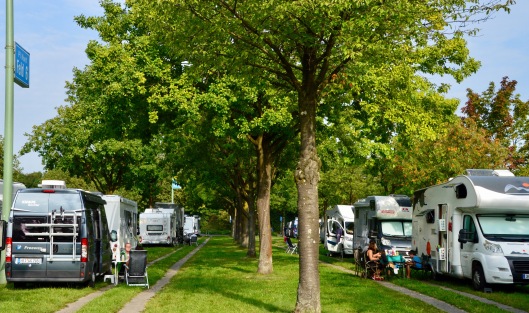 Three or four thousand motorhomes and caravans pitch up in the grounds and it is a thoroughly social occasion with beer tents, food stalls and live music and good facilities for those who prefer them. The exhibition area with its giant halls is under the Dusseldorf airport main flight path so you wouldn’t book here for a few quiet days away from it all. I know that nearly all followers of this blog themselves travel extensively and see different standards of pitching and site administration in their travels. This is a slick and fast pitching operation which it needs to be but cautious spacing is not on the agenda.

1. The number of van conversions on view has reached bewildering levels.

2. The show has a large number of bespoke vast military pedigree four wheel drive motorhomes which are far removed from the very welcome appearance of the new Fiat Ducato four wheel drive variant. Also, the show features F1 style motorhomes many of which keep a top of the range BMW Mini is the garage.

3. I noticed that more and more manufacturers this year were adopting the marketing policy of separate stands for separate product groups. So van conversions would be in one place and motorhomes in another completely different part of the show in order that potential customers can easily focus on what they want. It is not new thinking – just more of it.

4. On motorhomes, minimalist white interiors are the order of the day. Out with the wood effect….

5. One of my grandchildren thinks it incredibly cool that there is a Dexter van conversion – obviously named after him he feels!!
WIDER DUSSELDORF COVERAGE.

For much fuller video coverage by the talented journalist Andrew J Ditton do click HERE or enter this next link if clicking freaks out your computer.

Andrew is producing a series of video blogs from Dusseldorf of which this is the first; his manager Dougal puts in the occasional appearance much like Alfred Hitchcock did in his films.

It truly is an enormous and stunningly informative show. Last time I went I hooked it up to a few days holiday in Germany which is a good use of time but this time it had to be a there and back affair. None the worse for that.

Now in its fifth generation and celebrating its 30th anniversary, the Fiat Ducato is to be fitted with a new range of fuel-efficient 2.0-litre, 2.3-litre and 3.0-litre Euro 5 compliant Multijet ll diesel engines.

The 2.0-litre 115bhp will not be coming to the UK as it’s not compatible with right-hand drive vehicles however, Fiat Professional in the UK should be offering a 2.3-litre 110bhp version (in lieu of the 2.0-litre) as well as 130bhp and 148bhp models. The flagship model will be a 3.0-litre 177bhp variant.

All feature a Diesel Particulate Filter and come mated to a six-speed manual transmission, as well as the option of a six-speed semi-auto manual gearbox for the 3.0-litre.

Fiat claim fuel consumption improvements in the region of 14% over the current Euro 4 engines, whilst service intervals for the new powerplants stand at an impressive 30,000 miles.

Other upgrades include a redesigned dashboard, controls and instrument pack. Options include the latest load-sensing ESP system which can incorporate a new selectable Traction+ function for those operating in low friction environments.

The Euro 5 Ducato goes on sale across mainland Europe at the end of June, with right-hand drive models available in September. Prices are expected to be a fraction up on the models they replace.