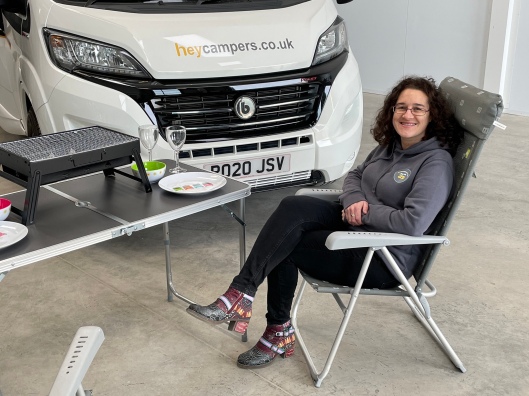 A passion for camping led one entrepreneurial couple from Leicestershire to invest in a new motorhome for hire business, Hey Campers – after the COVID-pandemic accelerated their modest plans.

Trudi and Adam Lilley have enjoyed outdoor adventuring together for the past 11 years and for five of them, have been motor-homing. After investing in their own home on wheels and choosing to let that out when it wasn’t being used by them, they saw an opportunity to take their stock of one vehicle to six – and are now looking to order more for the booming summer season.

Now, the duo, who have run an accountancy consultancy together for the past seven years, have taken on new premises for Hey Campers, in Coalville. With the aim of opening their depot as a show home when COVID-restrictions ease, it’s currently home to Tillie, Beni, Lexie, Lillie, Minnie and, Tessie – its six motorhomes who, as the names suggest, are already very much part of the family.

Hey Campers co-founder Trudi, said: “There’s so much uncertainty around holidaying and travel restrictions at the moment, but understandably, people are desperate for something to look forward to.

“We’ve already seen booking for half of our summer availability this year and feedback from campsites is that they’ve seen a rise in enquiries too. If holidaymakers can’t go abroad, then the chance to take to the open road and discover something new in the UK is a popular alternative, especially as motorhomes provide self-contained living with onboard bathrooms and kitchens.”

While the doors to the show home remain firmly closed for now, anyone interested in booking can take a virtual tour of their chosen motorhome and is well looked after by Hey Campers’ general manager and concierge, Samantha McCaffrey. Joining Hey Campers in early 2021, Samantha worked at Avis in Leicester before her role was made redundant due to forced closure of the depot because of COVID-19.

With extensive experience in vehicle hire and procedural management, Samantha’s passion for the role and her personal interest in the great outdoors, makes her the ideal fit for the brand. Joining as a marketing intern is also local graphic designer, Molly Jarvis. The Sheffield University student from Market Bosworth is responsible for managing Hey Campers’ social media and design.

Trudi concluded: “With Hey Campers we’ve added lots of personal touches and special extras, to make sure trips in one of our motorhomes, will be truly memorable.  These include luxury bed linen, made to order food hampers, 5G enabled WIFI fitted as standard and premium sports and movie channels.

“Our ambition is to also explore ‘money can’t buy’ experience stays and to get the message across to all our customers that with a Hey Campers hire they can have holidays they’ll remember for a lifetime.  Just last year, Adam and I were sitting in our motorhome Tillie in Jersey overlooking the beautiful St Ouen’s bay. As I watched the waves crashing over the rocks, Adam made us a Sunday lunch with roast lamb and all the trimmings. We sat down in this perfect location to enjoy our meal and I remember thinking, what more could you want? That’s what I want for all our holidaymakers.”

SOURCE: thisismoney.co.uk and Ray Massey of the Daily Mail.

Boris Johnson this week urged the nation to enjoy a ‘staycation’ in Britain, as part of the Government’s plans to ease the lockdown in England from next weekend.

With campsites and hotels able to reopen from July 4, there has already been a surge in interest in campervans that provide flexible, mobile and self-contained accommodation.

Manufacturers say they are getting calls from both stir-crazy couples and families wanting to explore the country safely and avoid the hassle of travelling overseas and quarantine on return.

Campervans are ideal for creating self-contained hotels-on-wheels — ‘bubbles’ with beds, fridges, cookers, kitchen and often a shower on board.

And there’s a good choice on the market to buy or rent.

Volkswagen is a leading player with its recently launched, and refreshed, California 6.1. It costs from £55,339 in Coast trim, up to £69,889 for Ocean. Based on the Transporter van, the 2.5-ton 2m-tall model sleeps four and has a raised roof. It comes with a table, cupboards, double gas hob, kitchen sink, a side awning and a sleeping space.

The larger Grand California, from £72,745 to £82,258, based on the Crafter van, sleeps two or four, and has a wet room with a toilet and showerIn March and April, online requests for quotes went up 250 per cent for the California. Nearly 1,500 were sold in Britain last year. They are factory built — not conversions — and can be serviced at VW’s 97 UK van centres and authorised repairers.

Horsham-based converter Sussex Campervans turns a Renault Trafic or Nissan NV300 into its Manhattan and Paradise ranges, from £41,995 to £51,995.

If ‘glamping’ is more your style, then bespoke luxury motor home firm GlamperRV.co.uk offers an office-hotel on wheels, from £75,000 plus VAT.

For British holidaymakers planning their spring and summer 2016 staycations, the south west has proved the most popular with an overall growth of 12% year on year following The Caravan Club’s peak booking day for 2016 UK holidays last week.

With Poldark season two and the hotly anticipated BBC adaptation of Agatha Christie’s And Then There Were None premiering over the next few months, and both filmed in the South West, holidaymakers are heading to the region to explore the dramatic coastline that takes centre stage in these popular TV shows. As a result, The Caravan Club sites in the region are continuing to perform well with a growth of 42% to Cornwall’s Looe Caravan Club Site and 41% year on year to Devon’s Putts Corner and Steamer Quay Caravan Club Sites.

The UK’s largest touring organisation, The Caravan Club, has reported an overall 14% increase in bookings year on year on its first day of UK-wide 2016 bookings.

Nick Lomas, director general, The Caravan Club commented, “We all know how great it is to be outside enjoying the UK countryside and coastline during the spring and summer months and it’s encouraging to see our members continuing to champion the staycation in 2016. With the devastating floods in Cumbria it’s reassuring to see Brits rallying behind the region and returning to The Lakes to support local tourism in its time of need.”

The Caravan Club has named 2012 ‘A Celebration of Touring’ in order to celebrate caravanning and motorhoming and the joys and benefits that it brings to hundreds of thousands of people across the country.

As part of the celebrations The Club is very pleased to be working with garden designer, Jo Thompson, on a ‘Staycation’ inspired garden called ‘A Celebration of Caravanning’ at this year’s RHS Chelsea Flower Show. The garden will promote the benefits of holidaying in the UK and will highlight the enjoyment of touring to a wider audience, promoting both the pleasures of caravanning and The Caravan Club, to the thousands of visitors that will be attending the show between 22 -26 May 2012.

Lawrence Bate, Director of Marketing for The Caravan Club, says, “Caravanning is a very British pursuit, and what better year than 2012 to fly the flag for touring and enjoying England. 2012 will see many visitors to the UK and a caravan or motorhome is a viable accommodation option, which is both flexible and affordable.”

He continues; “The Club already represents over a million members who recognise the positive aspects of touring but The Club hopes that by supporting this garden more people will gain insight into this wonderful leisure pursuit.”

Taking part in such a high profile event will also give The Caravan Club a great opportunity to talk to the national media about the thousands of beautiful gardens across the British Isles, many of which have Club sites nearby. I, for one, am very excited about The Club having such a fantastic presence at such a prestigious and respected event, especially with an extremely talented designer (who has a personal passion for caravans) representing The Club’s interest. I’m sure it will hugely benefit The Club as a whole and I can’t wait to find out how the garden does at the show and view the end result.

Jo started her career in garden design in 2005. She is recognised for her unique planting design skills and has been named as one of the 10 rising stars in garden design by House and Garden magazine. She is also a visiting tutor at the London College of Garden Design.

The Caravan Club’s ‘Celebration of Caravanning’ garden combines the latest colours and planting trends with a practical and useable space. It takes inspiration from a bygone era, of nostalgic family caravanning holidays, a very British past time. This is the first time that a caravan has appeared at the Chelsea Flower show, and The Caravan Club want people to see caravans and caravanning in a different light.

A liberal use of pink and cream roses and peonies soften a fairly geometric and simple layout which is based around a vintage caravan at the far end of the garden.

“This garden was always intended to be a real garden,” Jo says. “A place that people could identify with, recreate at home, a space that you might find at the bottom of your own garden. I hope people find it welcoming with familiar and traditional plants arranged in a fresh way.”

Working with UK craftsmen, Jo’s designs for a water rill, to cool bottles of English sparkling wine, oak benches and a dog kennel echoing the shape of the 1950’s caravan are important British-made details in the garden. As are the cut flowers grown on a smallholding in Somerset which will decorate the interior of the caravan.

I am pleased to announce Jo has agreed to give us regular updates on Club Together, allowing us to follow the progress of The Caravan Club garden. Jo will also be giving us some helpful hints and tips on what we should be doing in our own gardens, invaluable advice from a top designer exclusive to Club Together.