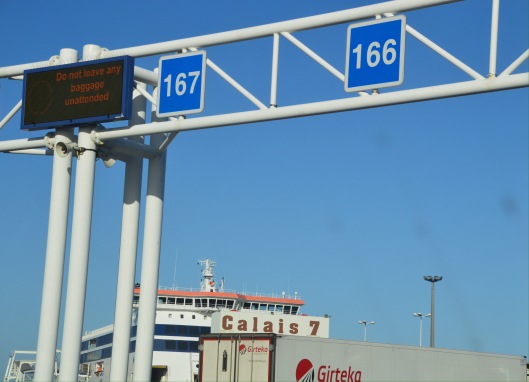 Coming through Calais today on my way home it was an absolute delight not to encounter loads of people in nearby fuel stations and on the roads into the port trying to jump into my motorhome or attach themselves beneath it. Not one.

I know the UK government has offered some financial assistance to the town of Calais to deal with what was becoming an intolerable problem and it seems to be working. The makeshift camps have gone to the relief of Calais residents and I felt very much more relaxed going through the port.

My motorhome was pulled to one side and examined by the UK Border Agency – the officer told me it was his dream to own a motorhome himself one day so we had a brief exchange of ideas on fixed beds and shower room sizes while he completed the search but I did sense that whilst vigilance is called for, some of the pressure is off. When I arrived in France earlier in the week I noticed a five mile queue of trucks waiting to get into the port by a slightly different route and I suspect this too is all part of the effort to reduce the number of people attempting to get into the UK unlawfully.

Life is definitely getting more complicated for us all because not only are we trying to eliminate illegal arrivals we are also trying to limit the numbers leaving the UK to join terrorist outfits mainly in Syria. I concluded that in comparison to the weighty issues the Border Agency staff are dealing with in Calais my brief visit to Montreuil and Vimy was distinctly mundane. And long may that continue.